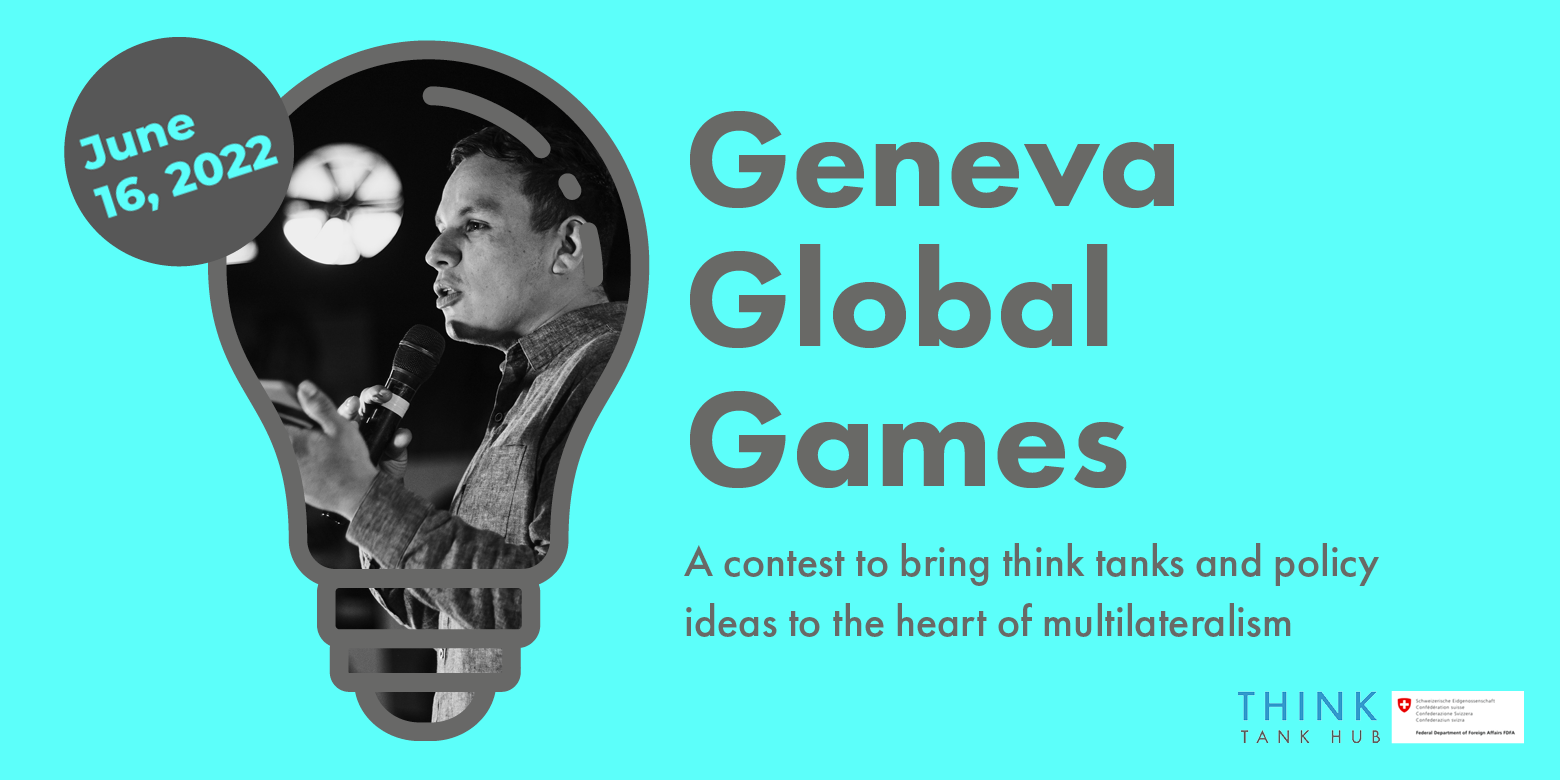 The Geneva Global Games will take place on June 16th! Hosted by the Think Tank Hub – a joint platform by the Swiss Ministry of Foreign Affairs as well as foraus, the think tank on foreign policy – and in partnership with Geneva Solutions, the Geneva Global Games aim to provide think tanks and research centers an international platform to showcase their expertise. Think tanks from around the world will present a promising future research or project to a panel of experts from the International Geneva ecosystem. Together they will build sustainable impact in key areas of multilateral policy-making!

Big or small, global or local, any think tank or research center with a relevant research idea will have the opportunity to showcase its innovative solutions for the future of global health and economies!

What is the programme?

The full programme can be found HERE.

You aren’t eligible to present a research project but are nonetheless interested in the event? You are not a think tank or you are not working on the Games’ topics, but you nevertheless wish to attend the Games? Then join the event as an audience member!

Green economy was put on the top of the political agenda following the financial crisis of 2007–2008. Recession, debt, job losses, and business failures coincided with increasing concern about the impacts of climate change resulting from anthropogenic activities. All these crises occurred against a backdrop of publicized ecological degradation, and growing concern about its impact on human life.

The preoccupation at the root of the green economy isn’t new. Sustainability, the mother concept, was first presented to the world of international politics in 1987 through what is now commonly known as the Brundtland report. The report insisted on a “development that meets the needs of the present without compromising the ability of future generations to meet their own needs”. This is the heart of sustainability and green economies: the health of people and the health of the planet are interconnected. The green economy should therefore be understood as an economy that improves “human well-being and social equity”, while simultaneously “reducing environmental risks and ecological scarcities” (UNEP, 2011, Modelling Global Green Investment Scenarios. Supporting the transition to a global green economy).

While green economies are a future-oriented plan, which takes into account social inequalities and human well-being, they don’t escape criticism. The role of economic growth, which should be maintained, is notably criticized. Green economies are sometimes considered another way of saying “almost business as usual”, a status quo that is more and more frowned upon, especially in the context of Covid-19 and climate change.

However, emerging during a time of financial and economic duress, “green growth” and “green economy” have become popular concepts across all major world regions. The appeal lies in the collaboration of economic growth and environmental responsibility while encouraging social development, alongside the possibility to restructure the economy to our needs without any losses.

In the context of the Geneva Global Games, we address green economies as they are inextricably bound to Geneva itself. The Partnership for Action on Green Economy (PAGE), which supports the countries wishing to embark on greener and more inclusive growth trajectories, is based in Geneva, as is the WTO, which is strongly linked to sustainable finance. If your think tank intends to address green economies and all their challenges, the Geneva Global Games are the perfect opportunity to present your idea!

Which opportunities for public health?

Digital technologies are changing our health systems at all levels: from the research of new vaccines, drugs or medical devices to treatment methods and healthcare services in our everyday life. They open up new and partly still unknown possibilities, changing the way we understand health and how we deal with it.

Digital health is not a new phenomenon and has been discussed since the mid-2000s at the multilateral level (falling under the term ‘eHealth’ back then). Yet, recent technological developments and Covid-19 have acted as catalysts for increased awareness on and about need for action from a policy perspective. For the international community, the digitalisation of health systems offers new opportunities to achieve the goal of Universal Health Coverage by 2030 (Sustainable Development Goal n°3) as well as, for example, to combat infectious diseases such as Covid-19 more effectively.

While the opportunities are immense, there are as many challenges around digital health technologies and solutions (e.g. misuse and discrimination related to the data used), which have to be addressed.

Further useful information can be found in the event FAQ.

This event is organised by the Think Tank Hub, an initiative endorsed and supported by the FDFA.

Since its founding, the Think Tank Hub has organized more than 20 Think Tank Talks with over 500 participants, 4 editions of a Winter School for Think Tankers, numerous Afterworks and Joint Lunches to connect professionals of the international Geneva ecosystem, hosted 63 think tanks in its offices and conference rooms, and established partnerships with over 60 international organizations and 30 think tanks. Its core role is to build bridges between different stakeholders, create a space for policy discussions around key multilateral issues, and ultimately meaningfully contribute to policy making. As a hub, it is also a space for foreign think tanks to bring up fresh ideas and expand their advocacy work within the International Geneva sphere.

If you have further questions concerning this project or the Think Tank Hub, contact us at info@thinktankhubgeneva.org.